In light of the exciting developments that have been taking place outside of the university environment (things like Comiket, my review and MY NEW SHOP WHICH I JUST DON’T THINK I’VE GONE ON ABOUT ENOUGH), I’ve done an excellent job at neglecting the work I’ve been doing within the big, ol’, yellow institution.

This post will be an attempt to correct these wrong-doing by bringing you a little snippet of creativity from the life of University.

You know, that place I spend 80% of my time. The reason I live here. That one.

So, we’ve been working on two, comparatively short projects that, although required separate outcomes, held a common theme and were (presumably) designed to feed off of each other to an extent. In short, we started with an object that we were then to expand on and extend into an environment of our chosing. (There were many more restrictions than that, but we won’t get into that just now.)

In a nutshell. Give or take a bit of research.

Our outcomes were to be a sequential narrative, for which we had to convey this sense of movement in 9 panels (something I think my all night comic-making-athon may have put me in good stead for), and a soundless animation of 15 seconds or more. Simples.

It’s been, for the most part, good fun. The Animation comes first in the saga of the weird Tree Creature. It’s jerky, it’s rushed, it’s wibbly and just generally a bit crap and so, totally not worth the amount of time sunk into it’s creation. But the more I watch those meager little 24 seconds, the more I love it. Like a really ugly kitten. Or a child who just can’t get his head around potty training.It’s my first ever start stop animation and so I feel I’m entitled to a bit of forgiving in terms of the craft. It’s made by my own fair hands and therefore, by default, I’ll love it always. If only as a milestone in my creative journey.

And even if it does leave a little poo on the proverbial carpet every time I watch it.

My static image sequence, while still rushed and far from perfect, had the advantage of being a practice I was familiar with. In an attempt to communicate this driving theme of the mask’s wooden texture, I made the (pretty foolish to be honest) decision to linocut my sequence in three colours which, due to the restrictions of the process and size of my lino, added a simple bleakness to the images and lost a lot of potential detail. As I’ve said, just a little too often about my work before, they’re not the greatest feat of printmaking known to man, but time played a restricting factor that forced the simplification of imagery down to the point to see here.

While I loathe to consider them a direct sequel to the animation (due to my own personal gripes regarding the film industry), they could be considered to continue the narrative previously explored, and therefore should really be seen second. You know, seeing as they were offered as a joint brief and all. 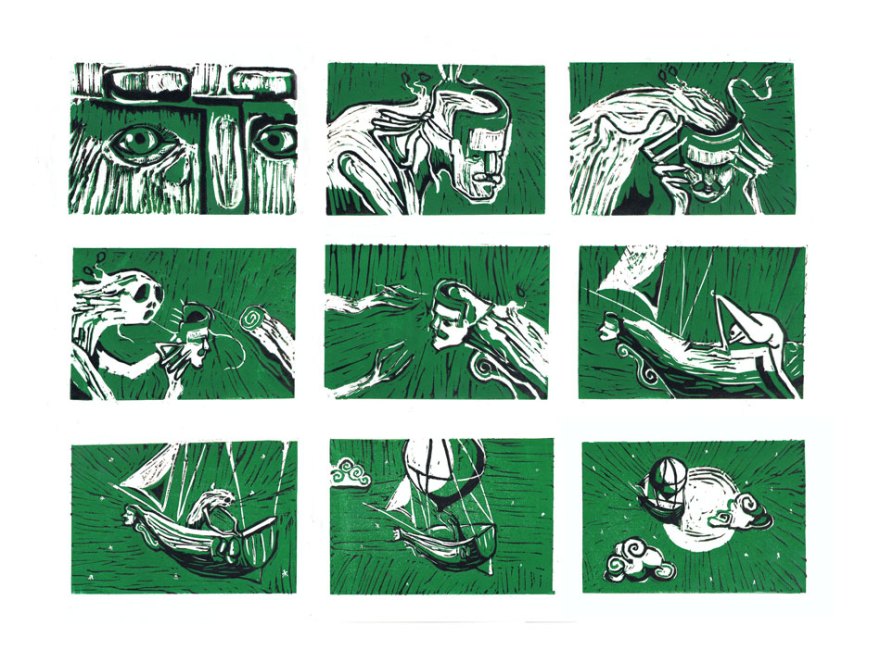 Originally I’d planned to bind them into a concertina book, sandwiched between a hard front and back cover. I have two prints of each image, so it’s something I could still well do, but actually, in terms of the movement between image to image as a sequence, the simple grid of 9 works rather well. They break up well into columns of 3 and I think that adds a nice pace to the movement that could easily be lost in the transition into a bound document. There’s a certain stillness to the images that I’d worry would be compromised to an extent if they were to be viewed in one, continuous line. As much as I love books and book binding.

So there’s a little taste of what a Bath Spa student has to offer. Wooden Creeps and wibbly frames. Top-Notch talent only in that school doncha know.

Bugger, I was hoping to keep this post short so my flatmate doesn’t laugh at the cyber-typing-diarohea from which I suffer, but I seem to have had another attack.

Sorry about that fellas.

One thought on “Sometimes at Uni, I do things FOR Uni!”