Yeah alright, so it’s been an age since my last post. And I have actually been busy too, which is doubly annoying because I’ve actually had bloggables to share with you, and simply haven’t done it due to extreme laziness/business/general heat-envoked fatigue.

So let’s go back an age or two when I was a good blogger and pick up from there shall we?

So, I was lucky enough to get myself a spot at the International Alternative Press Festival on Sunday 5th and have to say, it was a bit of a blast.

As usual for these little graphic gatherings, I met some truly awesome people, had some bat-shit mad conversations and generally flogged a whole load of my stuff. 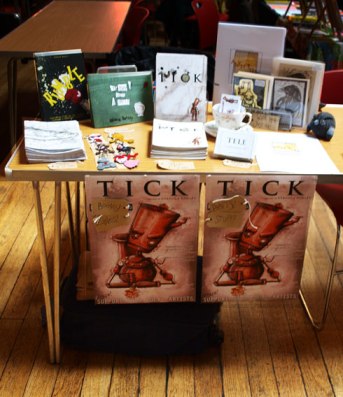 It wasn’t as manic as Comiket, but given that it was a Sunday and during that mad thing that was the ‘Lympiks (sorry but did you SEE the boxing?? It was frickin’ AWESOME) that was only to be expected.

I was selling the usual: Tick, Rumble and all the zines as well as a selection of limited edition linocut and screen prints. The Sock Creatures once more made an appearance and did so well, I’m sorry to say I don’t even have photos of most of them! They were flying off the stall like mad. Only three remain with me so I’ll have to get sewing in anticipation of the next one!

And they weren’t the only addition to  my ever-growing repertoire of textiles. Due to the success of the sock animals at previous events, I’ve recently been knocking up a new line of fuzzy cute things:  The Felties. They made their debut on the stall at the IAPF and did pretty well too!

So, surrounded by incredible examples of storytelling, I had a pretty ace time, met some totally weird and wonderful people and made a little money while I was at it. It’s at these things that I tend to be reminded how great my life can be!

If you have never been to an independent/small press comiket I suggest you get on the internet and find out when your nearest one is. They really are a brilliant laugh and I can guarantee you’ll find some kind of gem hidden in one of the stalls.

Plus then you can buy a sock animal. Don’t pretend you’re not tempted.