I like birthdays. Not really my own, I’ve grown a little tired of that one over the past 22 years. It’s always on the same day, SOOOoo unoriginal. But I like the birthdays of those nearest and dearest because it’s one of those occasions where it’s acceptable for me to force my work, baked good and other forms of general handmade nonsense on people and they HAVE to pretend to be grateful. This year has been no exception to this rule, and I dread to think of the amount of hours I’ve clocked up in the past eight months crafting nonsensical felt characters, photoshopping bizarre and often totally inappropriate cards and drawing and printing over ambitious comic books.

Yes the number of people on this earth who have been subjected to some kind of Bagley-Original has risen quite dramatically over the past few months, and with the onset of my kid sisters birthday recently, I decided that there was no call to stop now!
It’s always a little frightening when the people you remember being small enough to fit in the kitchen sink like it was yesterday, suddenly turn around and announce they’ve decided to be fifteen now. I actually find it disturbing to the point that it’s a little bit rude, but she decided to do it anyway. And luckily for me, Rhianna (yes, yes, like the singer except she actually manages to spell it right) is in possession of a similarly questionable take on the idea of “being grown up” to my own. In that you shouldn’t really do it because it’s boring.

So in the spirit of our shared view on the legitimacy of adulthood, and the fact that this is the first time I’ve been home for her, rather inconsiderately placed summer birthday, for quite some years, I decided to make a bit of a fuss and theme it like an Alice in Wonderland Tea Party.

Considering it was only really me taking care of the birthday business, as my parents had to work on the day, it turned into a comparatively elaborate affair, and as such the retelling will be done in two parts. For now we’ll just have a little chat about the present I made her: The Doormouse’s Hints and Tips for Life; A tiny, leather-bound charm on a necklace containing numerous questionable facts and general helpful nonsense for life.

I gave it to her by tying helpful, directional luggage tags (“Follow Me”, “This Way”, “Just a Little Further” etc) to a long length of string that ran all around the house, in and out of doorways, along banisters and finally into the kitchen where the tea party was arranged, and finally into the sugar bowl where it was hidden. 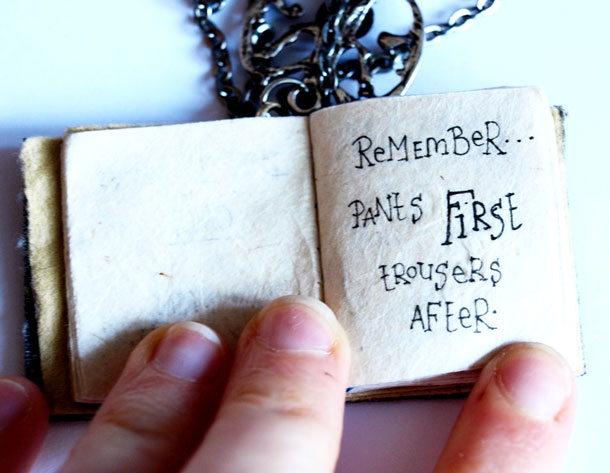 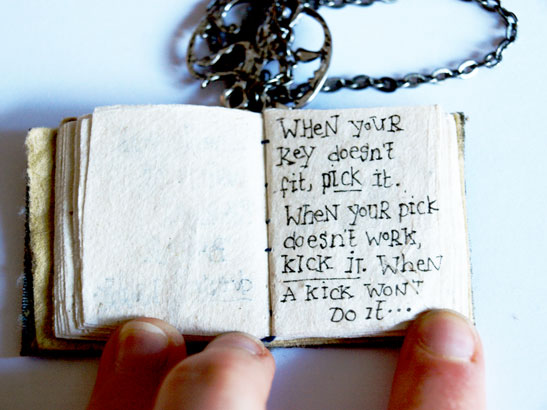 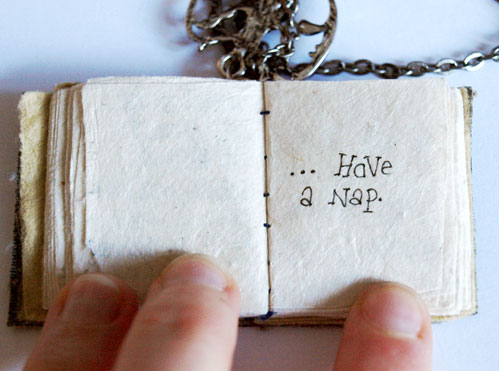 Happy Birthday Nan! May this little gift serve you well throughout the adventure you’re about to embark on. Next stop Sixteen, when the tips for life start taking a bit of a different bent.

But for now, just enjoy the fun of nonsense and all the creativity that comes with it. And don’t forget to clean behind your ears.

Love from your Big Sister.