Help me out by spreading my birthday entry, linked below! 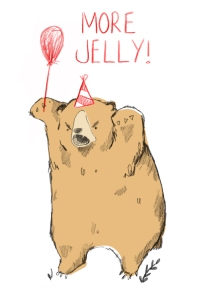 It was a cruel trick to play I know, to leave you on such a adrenaline pumping cliffhanger yesterday. How very dare I weave the beginnings of such an intricate retelling of the Alice Tea Party, only to snatch away from you the sweet satisfaction of conclusion. To tempt you with tales of the present, only to deny you of the details of the gastronomic literary spread. For shame!

Yes, I am a cruel storyteller and, more to the point, a lazy blogger. And yesterday I had things to do.

But, for those of you who were a little intrigued by The Doormouse’s Hints and Tips for Life  that I had made for my little sister’s birthday, I bring you a few snippets of the rest of her birthday tea.

As I said, I had decided to theme it like an Alice in Wonderland tea party (if I’m quite honest, the real reason for this is that I, myself, have always, ALWAYS wanted to have an Alice birthday party due to an uncontrollable adoration for the books and original Tenniel illustrations. Only it’s never materialised, so I thought doing it for my kid sister, getting to organise it and put it together, was probably the next best thing!)

Like with any handmade party, there were several limiting factors. The first being that I was, more or less doing it on my own due to work commitments of the ‘rents so how much could be achieved had to be realistic, and the second being that I wanted to keep it a complete surprise, no mean feat when Rhianna was milling about in the house doing lazy, birthday things. Luckily, a friend of mine had a birthday around the same time, so I’d managed to convince lil’ Sis’ that the extraordinary amount of baking that was taking place was in her honour.

Earlier that week I’d bought a coffee set for the occasion, so the night before my Mum and I had set about making black and red berries in jelly to set in the little espresso cups. We’d also made the layers of the cake, however it had not been constructed or decorated. And nothing else had been baked or made, so I began at 8am, baking, wrapping, decorating more or less without stopping, to have it all set up for when my Mum returned from work at 5.00.

All things considered, I don’t think I did too bad a job. It was certainly worth all the work to see Rhianna’s face when she followed the string into the kitchen. And she later announced, I hope in earnest, that it was the best birthday she’d had thus far. Which is gratitude enough for me, and really lovely to hear when you’ve been working so hard on, what turned out to be, the hottest day of 2012.
I mean it when I say she deserves it though. She’s not been well for the past 5 years and hasn’t been able to go out and do normal teenagery, growing up things so if I can bring a little fun and silliness to her, that’s a job well done as far as I’m concerned.

We’ve been munching on button biscuits, multicoloured cake and Eat Me Jam Sandwich cookies ever since. But, Like it says on one of the pages of The Doormouse’s Hints and Tips for Life: “When in doubt, Use Jam.”

So really, we’ve just got into the spirit of it all!

And yeah, okay so it won’t be the best attempt at an Alice party ever. I’m sure it’s been done a thousand times to a much greater effect than that of little old me. But it was all one hundred percent handmade with such love, and received with just as much that I don’t think it could be considered too shabby an attempt. And it certainly got the reaction from my little sister that I’d hoped for.

I’d love to know what Carroll would make of it.

Actually, scrap that, he would probably be so off his face on various narcotics he wouldn’t have noticed anything was odd.

I bet his head was an interesting place.