So, it’s that time of year again when the winter has silently snuck up on us like a seasonal ninja and we’re caught, rabbit in headlights, totally unprepared for the looming new year. Perhaps it’s the hovering threat of ‘resolutions’ in the back of my mind, or perhaps it’s the fact that I swear it was August less than a month ago, but either way it’s around now I need to take a break, breathe and look over where on EARTH the second half of the year has gone.

The next few posts will be a few snapshots of how my 2016 has developed. I can’t promise I’ve learned loads, but I can promise I drew some things.

Don’t hate me, but I LOVE Autumn. Yes it cold, yes the days stat getting shorter but I am a sadist and love that I get my city to myself again when the kids go back to school.

Haha suckers, I finished AGES ago.

But September and October are especially lovely because it’s when the Bath Children’s Literature Festival rolls around. Which I love.

Although I didn’t get to see as much as usual (due to, ironically, having too much work to do in the field of Children’s Literature) I did manage to score two wonderful talks by a couple of heroes from the field.

Those of you familiar with Hamish and the World Stoppers by the unapologetically British author Danny Wallace will be familiar with the creative magic of Jamie Littler. His characters are full of subtle details and nuances that are the perfect visual vehicle for Wallace’s tone and the book, in my opinion, is enriched ten fold by his interpretation of its time altering world.

Not that he’d tell you that. I tell you, a more modest talent you will not find.

But humbleness aside, Littler did a stonking job of holding the stage, even without his extrovert counterpart. If his flawless live drawing wasn’t magic enough, the interaction with the audience had every kid grinning to ear to ear. Given the rare opportunity to command the hand of a professional illustrator, the creative, imaginative and frankly weird suggestions of the kids were flying as the audience created their own adventurous character for Littler to illustrate. 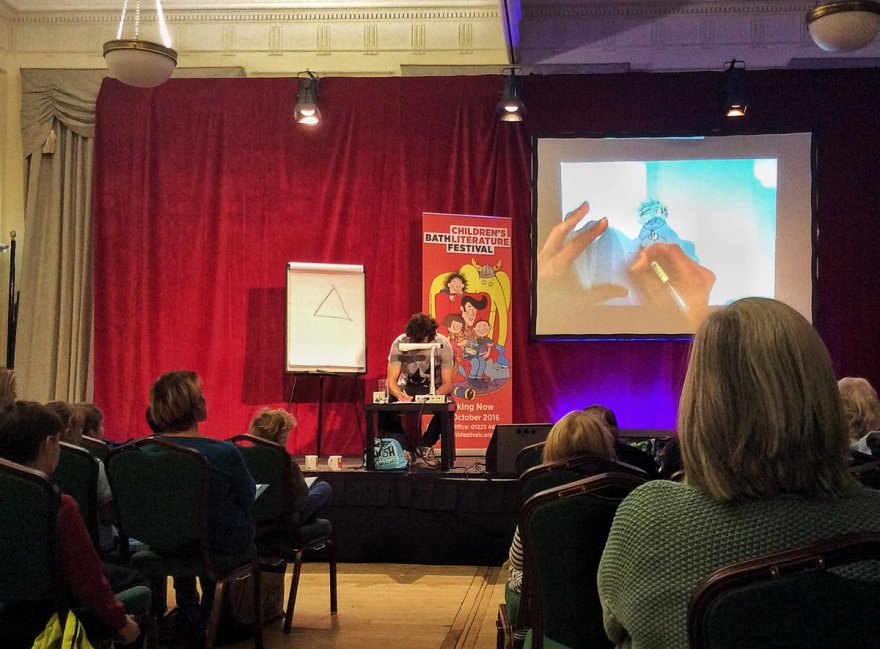 Part drawing, part storytelling, part comedy act and part workshop; this talk was inventive and a lot of fun. So really, pretty much everything kid lit should be. 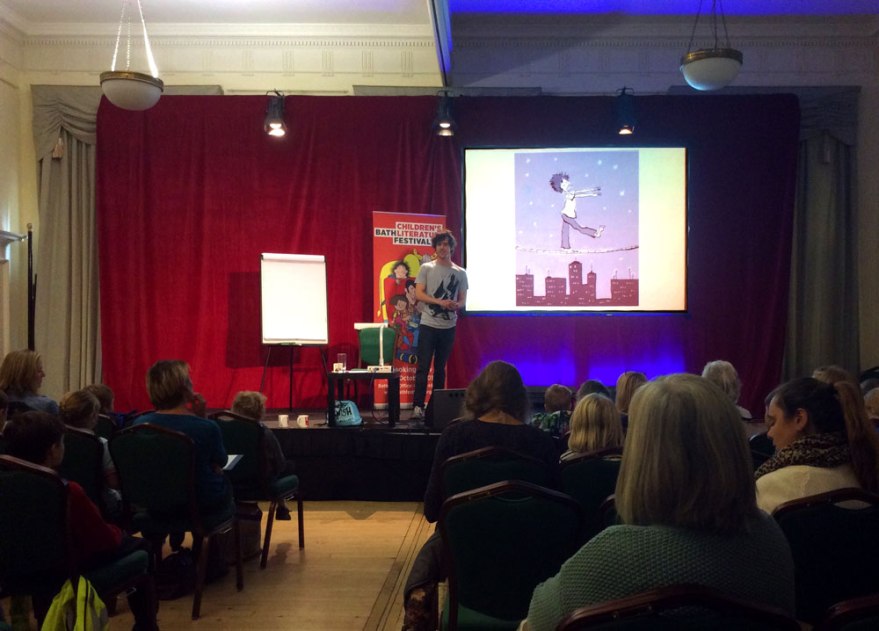 But if that wasn’t enough, I was also lucky enough to attend an event by the infamous Children’s Laureate Chris Riddell.

I’ll be honest, until fairly recently I didn’t really know what  Laureate was. But I was very excited that Riddell had kindly decided to bring his medal. And it was a very nice medal. 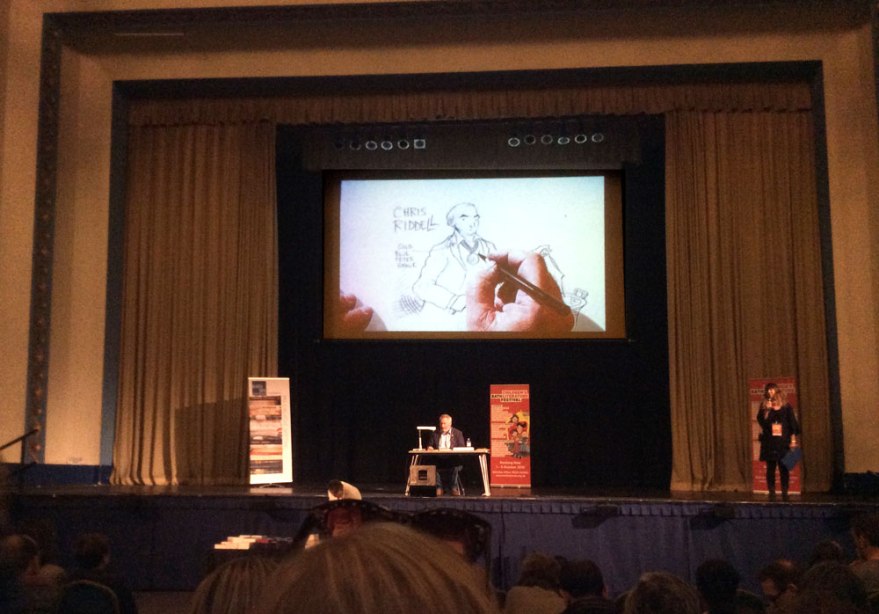 Hosted in the festivals most grand venue, it was strange to see the small figure of a single man, his projector and a sketch pad in the middle of such a large stage (even if he does have a medal.) But the second that man’s pen touches paper, he becomes the size of mountains. 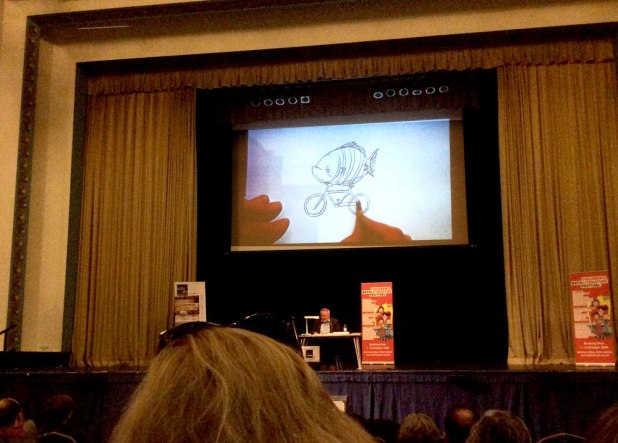 It comes as no surprise that the prolific Riddell can live draw like a champ, but his ability to ad lib to questions from the audience, while doing so is a thing to behold. Relaxed, funny and frankly, totally charming, performing apparently comes second nature to this guy. His answers to every question was insightful, elaborating on details of his life and artistic journey and expanding even the most simple of inquiry into an adventure worth drawing about. The added incentive of giving away the drawings he made to the questions he answered had kids jiggling in their seats with anticipation each time he reached for a card. The hall was completely silent, aside from the reactionary giggles. We were in the palm of his hand, and I have no shame in admitting it.

There are reasons some people get famous for what they do.

Not to indulge too dramatically in hyperbole, but I think I might have actually witnessed a real life living legend in real life this week. Seriously and for real.

Yep, as part of the Bath Children’s Literature Festival (of which I have been a devoted attendee for the  past 3 years) I attended a talk by none other than the charming and, quite frankly, utterly enchanting Judith Kerr.

An absolute staple of British children’s bookshelves everywhere, Kerr is one of those awe inspiring talents whose timeless works effortlessly span generation after generation, capturing imagination and breathing life into young minds with simple tales of simple pleasures. And really, who can’t relate to those?

From her magnificently quirky tales of enigmatic tigers and their casual visiting habits, to the familiar madness of cats, old ladies and, most recently, baby seals in the bathtub (yep), Kerr’s work has inspired and excited so many from the pages of her timeless titles, that I simply couldn’t be expected to resist the opportunity to see this godlike mother of charm in the flesh.

And what was she like? Well, she was everything I hoped she would be. She was an embodiment of her books; a perfect personification of charm, wit and warmth.

Led by the insightful questions from, Julia Eccleshare, Kerr wove elegantly from story to story, recounting memories and experiences that eluded to a, seemingly remarkably strange, lifetime; extractions of which formed the basis of every one of her tales.

Yet, as she spoke, with her enchantingly perfect comic timing and an unchallenged humbleness, it occurred to me with warmth that she was a true genius of creativity. Because really, her life had not been so grand or elaborate as first thought. Certainly not as much as you may expect from someone born in such turbulent times. Do not get me wrong, there had been interesting events most certainly, but I challenge any full life not to suffer a few of those during it’s progression.

No, I honestly believe that the true magic of Kerr’s work lay in it’s simplicity. It was her own wonderful eccentricity, that enabled her to extract those marvelous tales of curious wonder from family memories with the green bean obsessed cat. It was her interpretation and examination of the minutia of everyday life, and vitally the people in it, that transcended so well into, seemingly magical stories and eccentric, yet inherently familiar characters. Every one of us can conjure memories akin to those of family outings to the zoo, observations of adored yet barmy pets or childhood fondness of strange artefacts in our parent’s studies (admittedly a stuffed seal is a bit of a weird one), yet it is only a true genius of creativity that can take these everyday occurrences and use them to build tales of so much whimsy that they can, without fail, capture the imaginations of every reader lucky enough to consume them.

From this week’s brief insight into the world of Judith Kerr, I feel I came a step closer to understanding and sharing in the magic of her books. Throughout the course of the evening, a simple and charming truth became apparent. The magic of Kerr’s world was not due to a incomprehensible and unreachable grasp of the imaginative process, but rather a reflection of her own personality. Her books are a public extension of herself, in all her quirk, enigma and warmth. From the moment she began speaking, I was entranced by her. The presence held by her slight and delicate physical frame was instantly eclipsed by the immediate reveal of her sharp wit and, subsequently, her strong and enigmatic character. I could not help but draw parallels between this wonderfully sharp storyteller in front of me and the enigmatic whimsy I associate with her name.

She was seemingly  as timeless as her stories; a testament to the strength of result when the illustrator becomes a personal presence within their work. Perhaps some, no less talented, practitioners do write and illustrate successful worlds on queue, do create independently of themselves, simply to fulfil the goal of entertaining an audience, but I struggle to deny the magic of writing for yourself, with the joy of appeasing your own indulgences. It is through this process that one captures a genuine joy in order to share with others. I think it is these books that communicate a timeless magic. An honesty that cannot be manufactured.

Disappointingly, as there was no book signing a this one, I did not get to meet Judith. But her presence was so entrancing, I felt as though I had. A personality like hers is a joy to come across and I only hope one day my own work, and indeed myself, can speak with such as unique yet universal voice as hers.

And even if this is all just starry eyed hyperbole, one thing is for sure. I would absolutely love to have Judith Kerr over for tea. And I wouldn’t complain a bit it she emptied my cupboards.