I’ve been thinking a lot more about stories and comics recently. Mainly because I’ve not been doing so many and, given that this whole illustration thing has grown out of comics to begin with, I’m definitely now suffering the symptoms of some kind of creative withdrawal condition.

So when I saw the chance to do a two day illustration and narrative masterclass with Alexis Deacon (Beegu, Slow Lorris, winner of 2014 Observer/Cape/Comica Graphic Short Story Prize and generally good maker of things) while booking my Elcaf ticket, I thought it was probably worth a bit of investigation.

I’ve never done a masterclass outside of formal education before (certainly not one actually meant for grown up people anyway) and, to be honest, I didn’t really know what to expect.

In actual fact, it was like being caterpauled back into the welcoming arms of early university days again. Both days focused on different topics and I found myself with a curiously warm and fuzzy feeling at the notion taking part in a one day project; something that I despised being requested to partake in during University, yet have seemingly grown to appreciate in the name of artistic growth and discovery.  Back then, my stubborn, student exorcisms in self righteousness sneered in the face of actively creating “bad” work and paying for the privilege to do so; and I still can’t quite say it’s a method of working I’d chose to exercise on too regular a basis, yet there was certainly a joy to being apart of an environment in which you can genuinely bury any sense of pride or dignity regarding your work in favour of loosely and blinding discovering the new. It’s a bit like being creatively drunk. Inhibitions go out the window, your metaphorical artistic pants come off and you all dance on an entirely non-existent table of creativity, relishing the fact that in that moment, you can see the room from a completely different position from that you’re accustomed to.

So in the name of lowering all artistic inhibitions and creative inebriation, we got stuck in and had a lot of fun.

The first day was a masterclass on character and their roles and positions within the physical environment of a drawn story.

On entering, Alexis had drawn a massive forest environment and our job throughout the day was to populate it with characters who interacted with each other and their drawn habitat, both physically and in the creation of mico-narratives.

Alexis was an ace speaker and generally charming chap, focusing a lot about the analysis and theory of a character and inviting the group to consider each task. He spoke  a lot to various members of the group about simple visual elements, yet maintained a refreshingly analytical bent that I often see glossed over in favour of just making marks by less considered artists.

Having spent most of my creative life being told to think less and draw more, Alexis offered what felt like a refreshing and intelligent analysis of the physical form and it’s position in space. I felt encouraged to see his priorities and considerations when drawing a scene seemed very similar to my own inner processes and seemed like another tick in my head that for me, visual storytelling seems to be where it’s at; a feeling i believe to be echoed in the feelings of a lot of like minded characters in the room. 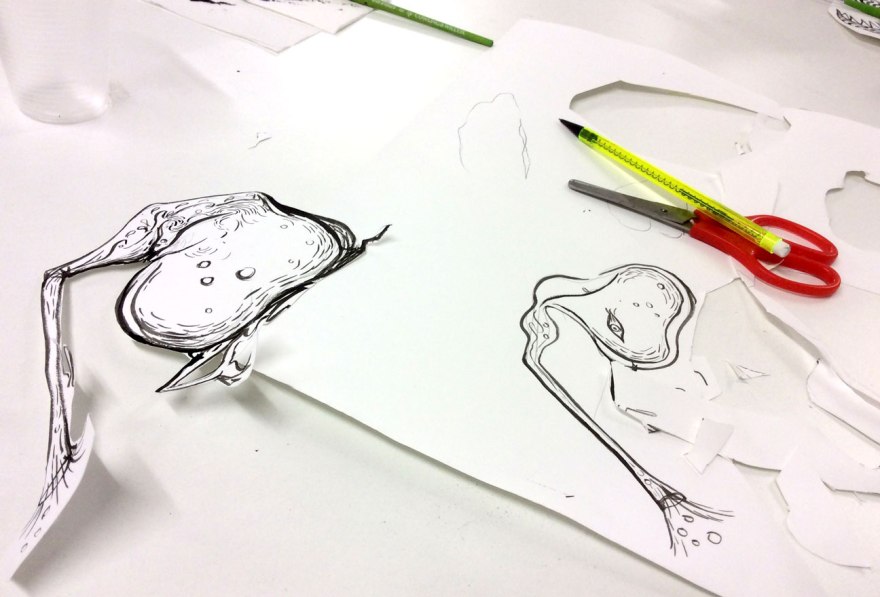 Even though the work we were making was quick and loose (probably not going on the wall), it all had a purpose within the context of the forest scene we were working together to create. I think it was this sense of consideration and context that separated THIS kind of quick project, from the kind I’ve encountered in the past where all sense and sensibilities go out the window in the name of blind “freedom”; a word that needs careful usage in my eyes so as not to make me want to grate my own face. 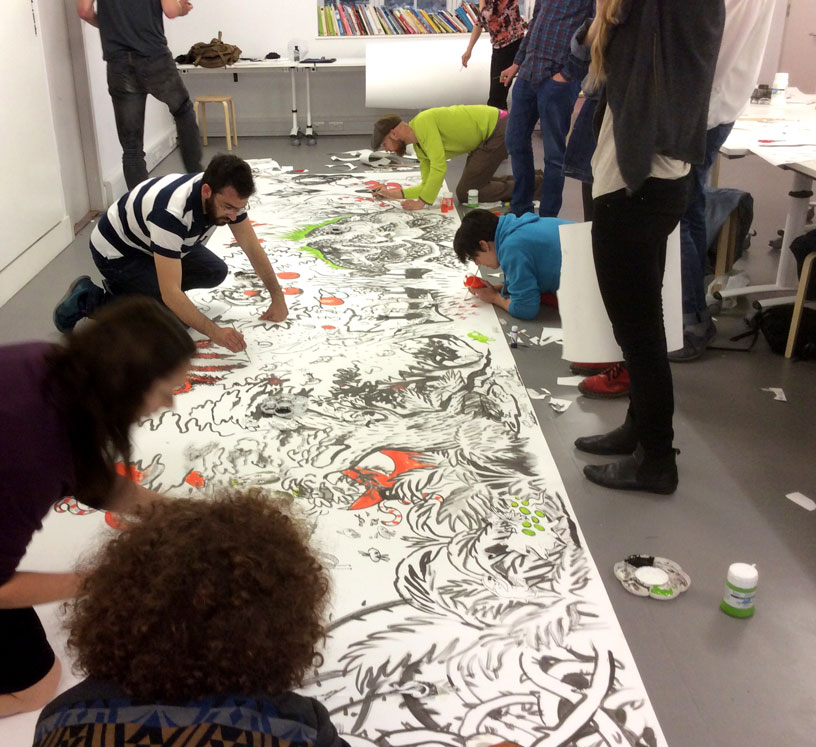 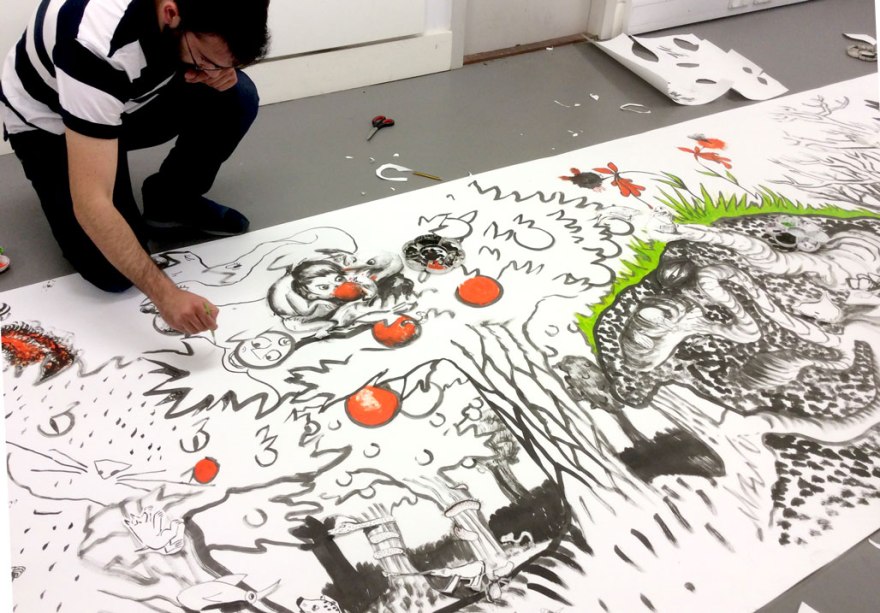 Anyway, the day spanned a series of short tasks and by the end, our forest was well and truly populated. Visual perfection, it was perhaps not, but it’s always been of my opinion that the imagery alone is inconsequential. The narrative if formed by a number of visual and inferred factors and I like to see our forest as an expressive anthology.

The second day was even more joyfully analytical and focused on the telling of a story and visual exploration of a narrative. It was potentially less involving than the first and I felt less apart of a group project and more considerate of my own part within the story’s structure, however this could have been due to a number of factors and I can’t pretend I don’t find working alone a familiar and comfortable position to be in. 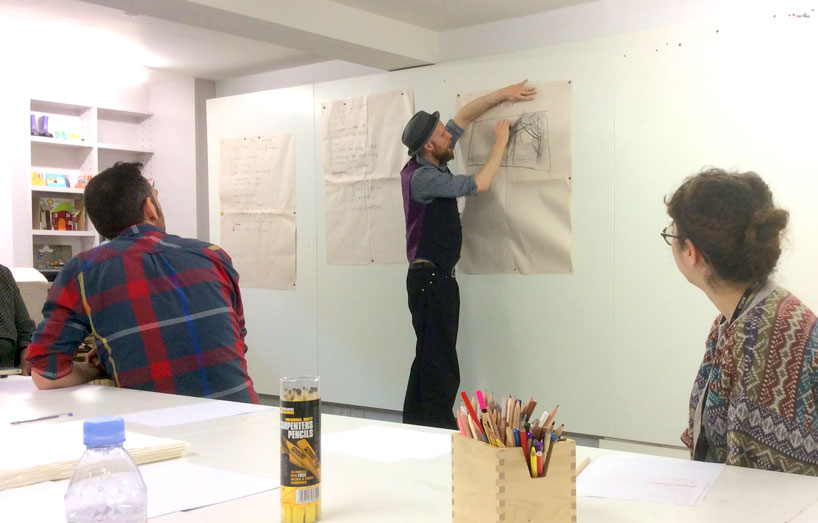 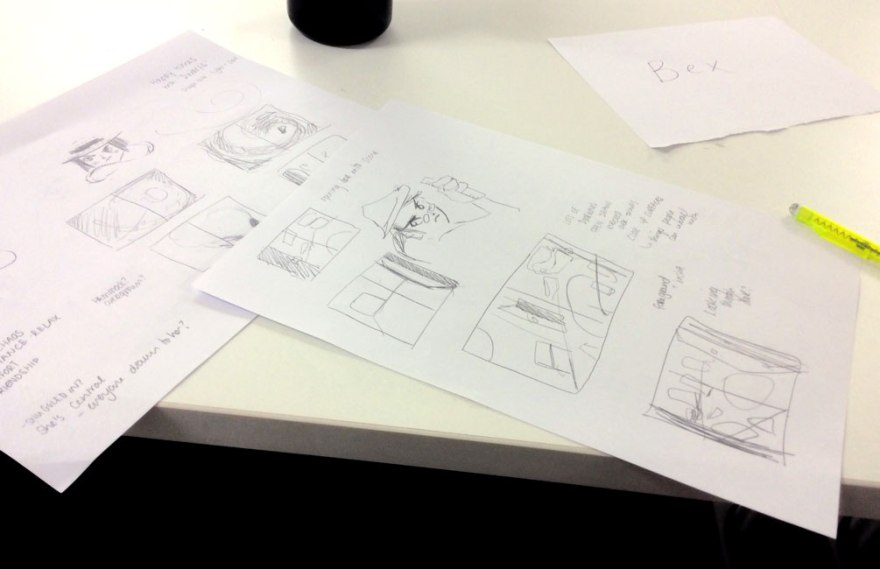 Having had a story broken down. we each tackled a key scene, as agreed by the group. Consideration was given to how the visual priorities and composition, lighting and other basic features were used in the process of communicating the intended emotional impact of the scene. The work was, again, loose and unrefined but I felt it was the perfect compromise of being able to shed the fear of producing a bad item in the face of pushing the intended impact of the image. The irony of course, as is always the way, is that when those creative beer goggles go on and the artistic inhibitory pants come off, then emotion of a scene can really be given the freedom to shine. Communication is a funny thing and the visual manifestation of it is just as complex. The fear of making something that ‘doesn’t look right’ is inherent in many, if not most, artists, but once that analysis and understanding of what you ARE trying to achieve within a piece has taken place, loosing the fear and daring to push out of a comfortable placce is seemingly the only route to really nailing an idea.

I requested to work on a scene that revolved around the environment, due to the fact that environments are not at all my forte, but I DID know how I wanted it to feel, so with this knowledge in hand I struck out of my comfort zone and really did just make a big mess.

You know, in the name of learning.

Thanks a billion to Alexis for all his help and critiques during this weekend. I cannot fathom how difficult it must be to teach real life grown up people but found an inspiring balance between honesty and criticism without falling into the patronisation pit. While I don’t think anything I produced was necessarily pride inducing, i think of this weekend as an exercise in the craft of storytelling.

So, after a long lazy gap my muscled have finally been well a truly flexed, it’s time to go make something.