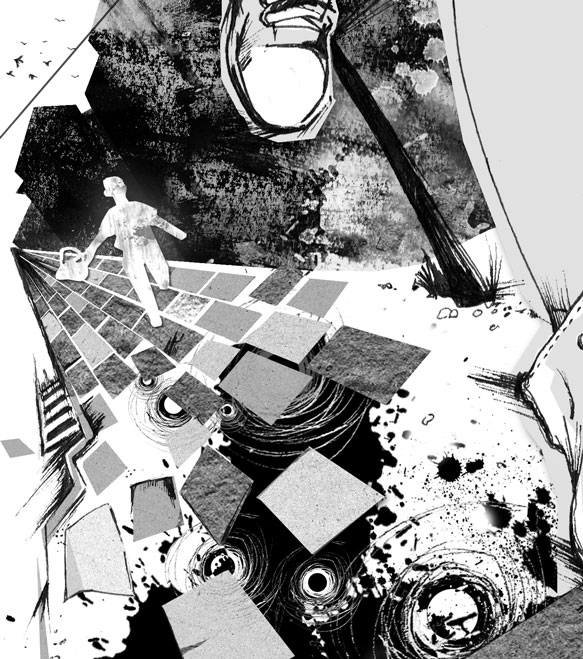 I’ve been working on a few drawings to go in the  Children & Young Adult Fiction Anthology for this year’s MA Creative Writing graduates at Bath Spa University. The Anthology’s titled Where the Wild Words Are and displays cheeky snippets ad extracts from each of the novels written by this years Graduates. I was lucky enough to devise illustrations for three of the stories, all of which are Young Adult extracts with a darker tone.

I wanted to depict the extracts given without preventing any imaginative interpretation on the part of the reader, avoiding visual repetitions of the, already very powerful, writing. Instead I teased out familiar motifs and visuals from the written extract and assembled them to make suggestions about the rest of the story, encouraging further interest in the rest of the book. Although somewhat literal in conjunction with the text, the images are intended as conceptual signifiers of the direction of the story.

Although I felt the inclusion of the characters was important, I tried not to give too much visual information away here either, either abstracting their faces or simply turning them away so that they’re not fully visible and recognisable.

After all, I don’t want to remove the readers ability to make visual interpretations, reading is about imagining! Plus I don’t see why I should be the one to do all the work.

So here’s what I got. Three pictures, for three stories by three, remarkably talented writers.

The Light in Our Hands

The Anthology goes to print sometime over the next few months and contains a plethora of talent and imagination from the students of the MA. The extracts and synopses for these, as well as many, many others had an enormous amount to offer and I hope my interpretations of their work are as valued by the authors as their stories were by me.

Look forward to it all put together now!