I’ve now been up since 8.30am Tuesday morning and I’m starting to feel the effects.

Basically, it’s all my tutors fault. Being the good student I am, I was sifting through the pages of university related crap that tend to accumulate in my inbox, when I found something of interest hiding in between the incessant barrage of SU updates (the beauty of this being that we don’t even have an SU office at my campus.)

It was the details for this competition. The prize is a bit tasty (because who doesn’t like holidays and comics?) but that’s not really why I wanted to enter. It sounds like a cop-out, but genuinely the winning wasn’t what I wanted out of it. I just really liked the idea of being set a comic book brief to respond to, that wasn’t simply self-initiated fun times. Plus second and third prize are free tickets to the festival, and I reckon any comics festival seems like a good thing to get involved in, given the success of the last one.

So here’s the catch. The email was sent yesterday. The deadline is tomorrow. And it’s mail only entry. So, I have spent the past…well god knows how many hours scripting, illustrating, photoshopping and indesigning a two page comic that I have now, I’m delighted to say, popped in the post.

So long as it arrives by tomorrow, the website says they’ll exhibit all of the entrants (so either they have a hench exhibition space, or they’re not expecting a whole lot of entries…) so regardless of if they like it or not, it won’t have been wasted. And yeah, okay so I have now missed a lecture and a seminar as a result, and won’t be able to spend the afternoon in the print rooms as planned due to an excessive amount of sleeping that needs to be done, BUT, while it may be a thumbs down on the school front, I reckon I deserve a fricking gold star for dedication to the craft! Or one for stupidity, haven’t decided which yet.

Here’s the original artwork for it, created by my own fair hands at a horrible time in the morning. 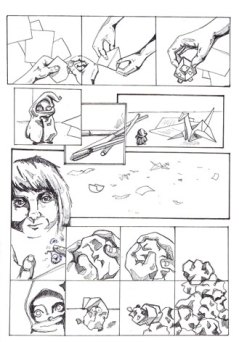 It’s a bit of a mental one, but that is what you get from trying to script a whole project in ten hours. It’s actually not my original idea, I jumped ship halfway through so this one didn’t really get started until about 9pm.

I stuck with a standard layout: double page spread. Yeah okay, I’m sure I could have really explored the brief and done something clever with the two pages, but when time’s against you, I like to focus more on the artwork and text than faffing about with potential novelties, as nice as they can be.

And of course, it goes without saying that there’s A LOT wrong with it. For a start due to my excessive tiredness at time of conception, it’s a bit too batshit mad to really be as directly communicative as I’d usually like (and the text doesn’t actually help much with that either, funnily enough.)

It’s a shame in a way. I think had I had more time to perfect it all, it could have been quite nice. The text needs an overhaul (both the script and I’m not overly happy with the font or placing of it in the final copy) and there’s a lot of work needed on the arrangement of cells. But hey, for a 10 hour comic I guess it could be worse.

Great practice as well. I’d like to get into the habit of knocking out short work on a regular basis, and while this wasn’t really finished to a standard I’d usually expect it to be at, I think i’s acceptable given the MAJOR handicap I was working with.

NOT that I really want to turn this all nighter business into a regular occurence. But it has been quite fun.

Perhaps I’ll turn  it into a mini zine or something. Thanks to the time, effort and cunning knowledge of a very Special person named Matt, the bagleybooks store is well underway, so all books and zines will soon be available over the magic of the web.

Needless to say, everything I am now producing, I’m seeing dollar signs all over, and this is absolutely no exception.

Keep an eye on the website for more information!

Okay, I’m pretty definite it’s bedtime now. Over and OUT.