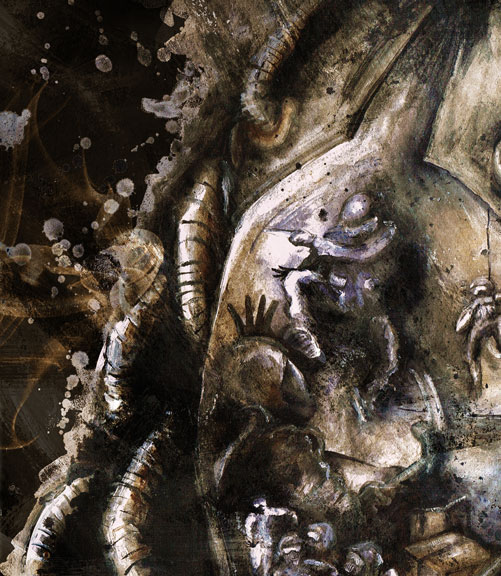 I thought I’d mix things up a bit for today’s post, and take a break from little drawings and odds and ends I’ve been doing (and no that’s not because I’ve run out of things to show. I’ve ACTUALLY just started another drawing now okay?  Don’t be such a bloody Doubting marvin.

No I don’t know what that is either.)

So instead I thought I’d do a bit of this whole social networking bit I hear so much about, and spread the word about a little project I was invited to do a wee bit of work for.

I was sent a rather neat little script for a short sci-fi film to be made this year. It was intriguing to me as a film, and had an engaging tone, good pace and nice, dark edge to it, but I started to really take notice when the writer  mentioned he’d like to release a short comic book alongside it. Unfortunately it came at a bad time for me, (it was during that very busy, recent period in which I  dropped off of the face of the internet. You know, the past seven months. That time. I like to call it “the mysterious phase.”) so I reluctantly declined the project.

I was then offered the compromise of doing the cover art for it, if I was too busy to commit to the inners, which pretty much seemed like a dream. It’s like being told “hey, you! You know that project you like but don’t have time to get involved in? Okay how about you don’t do any of the really hard graft but still get to work on it? Oh yeah, and it’s like, the first thing people will look at too. You in? Okay cool.”

I’ve no doubt it’s going to be stunning. For more information and to view it’s progress, check out the Youtube channel here, and read alllabauddit here.

And, incidentally, I’ve since seen some of the work from the inners. They’ve been taken on by a truly incredible artist and most certainly will not disappoint. Seriously, I’m almost glad I didn’t have the time they’re so good.

Anyway It’s going to be slamming and I can’t wait to see the fruits of everyone’s labour. Keep your eyes peeled for it and start getting excited.